It is so hard to believe that it has already been 4 months since we have all been together.  But then again, it's hard to remember how things were before these three blessing from China joined our family.  Each day brings so many new adventures for all the kids.  For Memorial Day weekend, I took all the kids on a mini trip for a family reunion, with my mom joining us.  Chris stayed back so he could attend the race, so it was quite the adventure for us all. Surprisingly, all the kids did pretty well - it was nearly a five hour drive, and we were all a bit tired of being in the car, but we got there without incident.  And they all did great at the family reunion, and of course Andrew and Ella were very excited that our hotel had a big pool.  They both spent many hours swimming, giggling and watching videos together. Each day, I continue to be amazed at how well the two of them are getting along.  Don't get me wrong - we have our moments - Andrew is pretty quick to speak up if he thinks things are being handled fairly, and he is always wanting to make sure they both get to do things, but given all the issues we could be having right now, Chris and I sit back with delight when we see them together.  After our trip, Andrew and Ella went off to MawMaw Ruth's house for a few days - she was very excited to have them all to herself for a few days.


But the big event we had this past weekend was celebrating William's 2nd birthday.  We were a bit worried about how William would handle all the attention, the break in our routine, and having so many people here at the house.  We did keep it relatively small - just family.  And we didn't get off to a great start.  William has certainly changed his tune since coming home.  He went from only letting Chris take care of him, to ONLY wanting me to do things for him.  And his response when he doesn't get his way is to scream very loudly.  My worst fear was that his birthday party was going to be alot of screaming, and he started it off that way, when the first people arrived.  But after a little quiet time in the bedroom with me, we were able to get back into the mix of people, and the rest of the day was great.  He LOVED his cake - dug right into it with both hands (and a fork that he managed to convince someone he needed).  It was so cute to see Ethan's reaction too.  He wanted some of that cake so much - he would walk up to William's high chair, and hold his mouth open to beg for a bite - and William tried a few times to feed him.  It was very cute.  After the initial excitement of William's cake, we went ahead and sliced off a piece of the big cake for Ethan so he could have his own.


After cake, we opened presents, and William wasn't too sure about any of that.  After he opened the first one, he just wanted to play with it, and was not interested in anything else.  Ethan on the other hand was right there to help William open up each and every gift - especially since he didn't think William was moving along fast enough.  Ethan was so excited to rip the paper off the boxes.  Christmas is going to be lots of fun this year, but could be a challenge if Ethan doesn't think William is opening his gifts up fast enough.  He might just take over and open up everything. 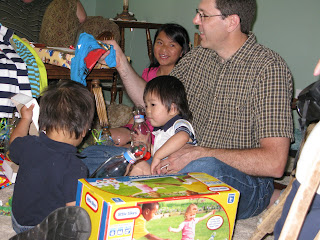 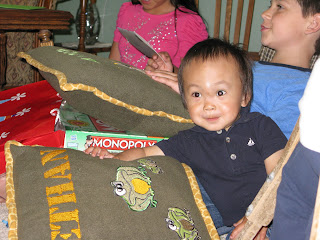 And after things started to settle down, then we took the boys outside to see the new sand box we bought William for his birthday.  We wanted something small for the deck that they could play in with their trucks - they both are very much into cars and trucks right now.  Apparently it was a big hit - both boys were covered with sand by the time they were done playing. 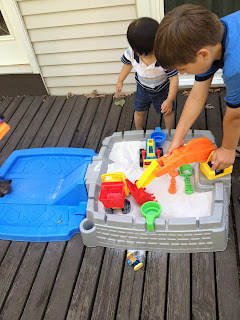 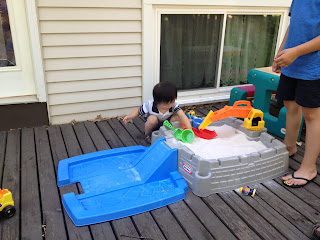 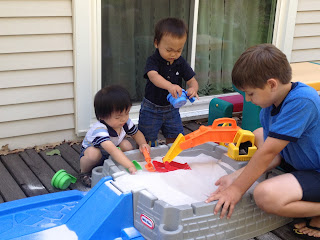 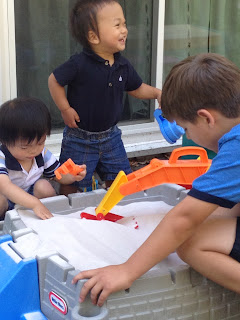 Posted by Deb Himsel at 8:29 AM No comments: