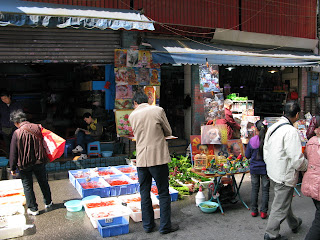 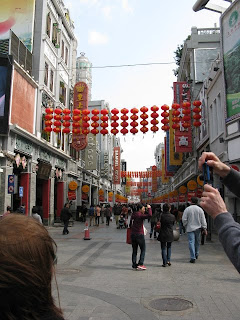 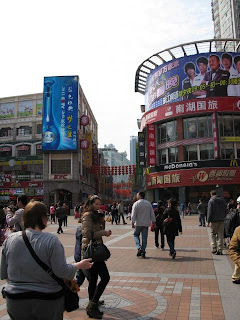 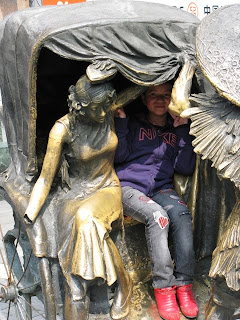 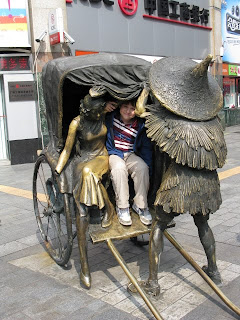 It's been difficult to post anything to our blog recently. We've again experienced Internet issues, and with two little ones, it just hasn't been convenient to get away to the lobby to send a post. So I'll try to quickly sum up the past couple of days in one post, with a couple of pictures.

Tuesday morning we had our consulate appointment. A different experience than when we went to the embassy in Russia with Andrew. There was a whole room full of people with the same appointment, and we waited until exactly 10:00 to start. They gave instructions thru their microphone regarding what was going to happen - first a group oath ceremony, then we would get called up one by one to present our papers. The comedy was that they still had 3 windows being used for non- adoption things, and they were talking in Chinese thru their microphones to the people at their windows. So basically it was a crap shoot to know when they called you up.

While waiting we met another couple adopting their first child - a boy who was turning 14 later this month. They were very nice, and even gave up one of their seats so I could feed William. While we were talking, they asked where we were from, and would you believe they both grew up in Fort Wayne? They now live in Winamac, but how ironic that the husband went to Carroll High School growing up? We've actually met quite a few very nice people by staying on the island. There is a couple that just received their 2 daughters earlier this week from Auburn. They are adopting twin girls ages 7. Very sweet little girls. Chris spoke to them more than I did, and I think he said they have 14 children, with about half of them adopted, and 4 of them from China. So they were very informative about what to do on the island. We also met at the hotel two couples that were adopting 4 yr old boys. Their little guys were adorable.

Anyhow, back to the consulate. When they called us up, the man at the window (thank goodness he spoke very clear English), had to do a visual verification of each of us with our passports, and then he looked at me with a bit of compassion in his eyes, and said "perhaps Dad now take the boys back to sit down and you stay up here to go thru the documents?". Yes indeed - standing while wrestling two squirming little ones, while he went thru each document in all three packets would have been painful. When that was done, we were finished. Loaded things back up and we were out of there.

Back to the hotel for diaper changes and then meeting the other couple traveling from FTIA and Eva to go to the pearl market and do some other shopping. I have just a few pictures uploaded from that adventure. On the way to the market, we went thru a pet market area. Ella and Andrew were both distracted by all the pets - lots of turtles, fish, kitty cats and puppies. Along with some bunnies and guinea pigs and what kid wouldn't be in heaven? We had a difficult time keeping them moving, and I woud not blame the other couple if they grew frustrated with us. We were quite a sight - 2 strollers, three adults and Andrew and Ella trying to keep up.

Anyhow, the pearl market was a huge success, and we also were able to pick up some videos and Chinese books for Ella. Now to make sure we have a region free video player at home. The other couple said they got theirs on Amazon so we'll be surfing for one as soon as we get home.

Back to the hotel, dinner and packing was on the agenda.

Oh yeah, I forgot to mention. Monday night I woke to chills and a high fever, and am now fighting a horrible cold. I'm normally the last one to get sick, but I was down for count Monday night. So Lynné has really jumped in and helped with the boys, so I hopefully don't make them both sick before we fly home.

On Wednesday, we finished packing and did a little shopping in the morning. Although we had a late checkout, we still were going to have to kill some time waiting for the kids' visas to be ready. It was the coldest day on the island, so not good to have the boys out too much, but we took Andrew and Ella to the park for them to play on the playground equipment. They had a ball running around together, racing on the slides, and getting exhausted.

Back to the hotel to meet Eva. She was right on time with our visas, and everything was in order except getting to Hong Kong.

Remember, we were going to take a train? Well, very dear friends of ours who have contacts thru work in Guangzhou and Hong Kong, suggested we take a van - less hassle than the train. After wrestling luggage at the Guiyang airport, I was very willing to take them up on the offer. I can not thank Matt enough for arranging things - we'll be indebted to him, and he will have a special part in the history of our kids adoption journey. Bless you Matt!

So they arranged a van to take us and our luggage to Hong Kong. I think we overwhelmed our driver with the amount of luggage we had - shoot there are 7 of us, so I'm sure we were a sight. But Ray managed to squeeze us all in and we were off to Hong Kong. About a 3 HR drive with rush hour, and luckily the boys slept thru most of it. I think even Ella slept some - exhausted from playing in the park.

We're in Hong Kong now. If I have some time before the boys wake up I'll try to post some pictures from the park. If not, then this will be our last post until we get home. I'm sure Ella will have some mixed feeling when we board that plane later this morning, but so far she has been nothing but excited about each new adventure. The translator has been invaluable to talking with her, and Eva helped us to explain to her what all was going to happen so I'm pretty sure she understands. Now to survive the dreaded plane ride home. And being sick on top of everything else. Yuck. Wish us luck and say a few prayers that we all survive this no worse for the wear. Goodbye China - until we meet again.