Am I a pop star Mom?

It's a definite - we are  exhausted after a great day of sight seeing - we really got a chance to experience Beijing today and Andrew got to be a star (more on that later). Since the other family also traveling from our agency doesn't get in until tonight, we were on our own for today.  We arranged for a tour guide and driver and had a full day lined up. Lydia was our guide, along with our driver Mr. Wong.

We started by visiting one of the Beijing Hutongs (old long lanes/alleys) where we were able to tour a family house - a courtyard with 4 living quarters. It was quite interesting to learn so much about how important the layout of the four house quarters was made around the family courtyard - for instance, the main living quarter (the north house) had 4 steps to enter and the others only had three, because it had more importance. So many significant choices in the design - we really felt we were getting a good peak into the old Chinese culture. After our tour, we took a rickshaw ride through a number of hutongs, with little shops and people bustling along. It was one cold rickshaw ride, but we all really enjoyed it. After that, we walked to the Drum Tower, and stopped along the way to watch the locals all playing on the frozen water outside the Forbidden City. Because it is still Chinese New Year celebration, the crowds are not too bad - Chris said the Forbidden City area was much more crowded when he was here in November. 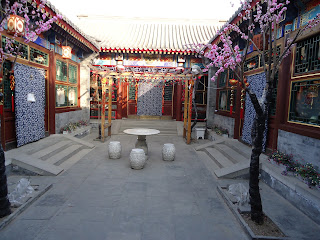 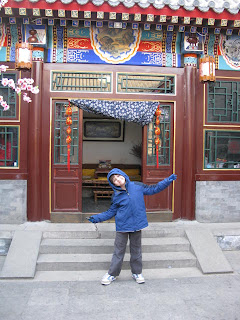 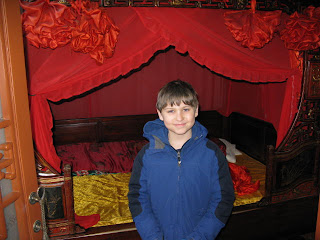 Now for that Drum Tower. What seemed like a good idea when Lydia talked about it, turned into one of my first experiences with China's love of stairs :) As most of you know, after my car accident in 2004, my ankle does not like it when it's forced to tackle alot of stairs. Well, we had about 70 stairs, at a very steep angle to take on to get to the top of the tower. Andrew was quite proud that he was the first one of our group to the top, followed closely by Chris. The rest of us made it finally, but not without my ankle protesting quite a bit. Chris said it was a good practice for us for tomorrow's trip to the Great Wall, but I'm not certain I'll be walking tomorrow yet alone tackling the great wall - I'm very thankful for the Advil we packed, that's for sure. We happen to get to the top of the drum tower right before one of the special drum performances they do for Chinese New Year. It was pretty awesome, and we took a video of it, that I may try to post later. Good thing I enjoyed it so much, because it made those stairs worth it. But what goes up MUST come down, and that was even worse than going up. But luckily we all made it without any embarrassing moments. 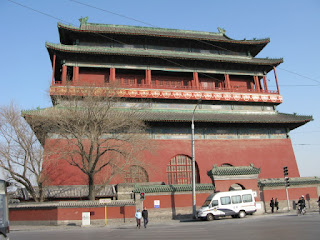 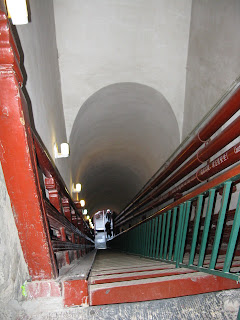 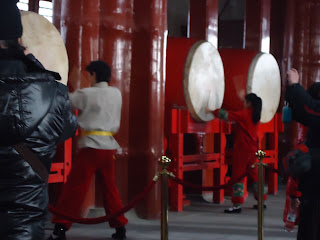 Next Lydia took us to a tea ceremony. I think Andrew decided this was his favorite part. We sat in a little area while a girl explained 4 different teas to us while she made each and had us sample. It was quite interesting and relaxing, and we all needed to warm up after walking out in the cold. Then we were off for our traditional Chinese lunch. We had a private dining room where they brought us all kinds of yummy food. We were quite hungry, and sampled everything. All but the soup was declared a hit - Lynné said that the soup tasted like feet - hum, wonder how many feet she's been tasting? Seriously, it wasn't an appealing taste by any means, but luckily everything else was very good. 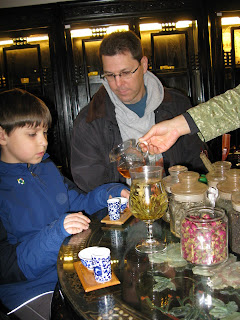 After our tea and lunch, we traveled to The Summer Palace, it was crazy busy, and we had a hard time keeping up with Lydia. There were tour groups all over the place, with everyone fighting to get pictures. I was having a hard time just making sure we didn't lose Andrew. He did pretty good keeping up with Chris, and since Chris towered over everyone there, I could always find Chris :) We had a "first" while we were taking our pictures in front of one of the rooms. Two girls wanted to take our pictures. Very odd, but it got even stranger. We had a man who was just enamored by Andrew. I guess they don't see many blue eyed boys over here, and this guy followed us for quite a while pointing and smiling at Andrew. He kept trying to get his attention, and so I told Andrew about him and that I thought he wanted to say something to him. Andrew turned, and the guy got a big smile on his face, waved and said "hi". Andrew said "hi" back, and this guy was beaming, and then he was gone. Very odd. As we walked the full length of the Sumer Palace, we were more and more aware of the attention Andrew was getting - he was definitely getting alot of pointing, staring and smiles. When we tried to take a picture in front of the marble boat, we had to wait for another family to get out of the way. When they saw Andrew getting his picture taken, the teenage girl in the family was all giggling and pointing to Andrew, and asked Lydia if she could get her picture taken with Andrew. He took it well, and had this girl and her Mom standing beside him for the picture. He was all smiles when he finished, and asked "Am I a pop star Mom?".  You are in my book, Andrew! Too cute. Not sure much could top that. 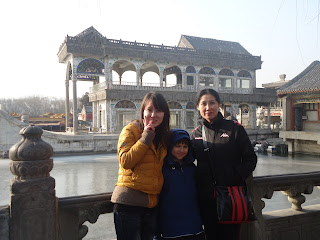 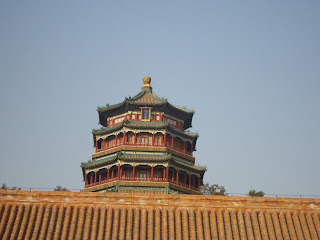 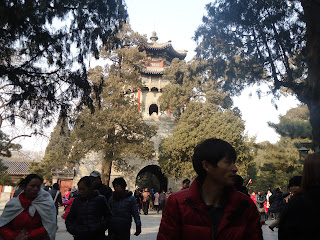 We finished up our tour a bit early, and Lydia took us to one of the oldest silk factories. It was interesting to watch the different processes. We saw how they unwind the cocoon to get the silk thread. Then we watched them breaking open the cocoons, taking out the dead thing inside, and stretching out the silk cocoon. Layers and layers of cocoon to make this piece of silk cloth about a foot square. Then we took one of those cloths to where 4 ladies each grabbed a side and pulled and stretched it out until it was the size of a standard blanket. They would do this over and over to make the light and fluffy silk stuffing for a quilt.  They even let us stretch out one.  It was very interesting, but then ended with them taking us into their silk store and trying to convince us we needed one of those silk quilts :). Other than the huge pressure to buy something, it was an extra bonus to our tour that we enjoyed.

Back to the hotel, a trip to the supermarket for some snacks and drinks, and a quick dinner was all we were up for. Andrew was nearly asleep as we waited for our pizza (yes Pizza Hut is adjacent to our hotel and we were all too tired from our full day to go anywhere else and try to navigate the language) so we all called it an early night after dinner. Need to rest up for tomorrow - and try to convince my ankle that a trip up the Great Wall isn't as bad as I think it might be. With any luck, I'll still be able to walk when we get to the kids in a few days.
Posted by Deb Himsel at 12:22 PM