And the Ceremony makes it final

We had a great night with the kids, and we had to be in the lobby early to meet Vickie so we could return to the small, cold, smoky room and finalize the adoption. Lynné and Andrew decided to stay back at the hotel, as did most of the other family's children. That wait was just too much for Andrew the day before, and it was definitely better that he avoided it today.

We were told that the care takers weren't going to be there but they both were. As soon as William saw his, he was all tears again. Ella seemed to be excited to tell hers all about us, and little Ethan just seemed overwhelmed - I'm right there with you Ethan - the whole process was overwhelming to me too. Probably because we were dealing with 3 adoptions ourselves, and there were 5 adoptions being processed that day, but trying to keep all of our documents straight for the three kids was a handful. And Vickie was running around trying to translate, get us to pay the different people who needed paid, etc. All in that very small and cold room :) And we got our hands slapped by the Director of the adoption office. Apparently Ella came from the orphanage with two pairs of pants and three shirts on, and we made the mistake of dressing her in only one pair of pants. We just smiled, thanked her for her concern and said we would be very careful that she was warm.


The only time I held my breath was when they had to interview Ella. Because she is over 10, she had to agree to the adoption. They took her off to ask her a bunch of questions. I have no idea what all they asked her, but I did see her sign her agreement to be adopted. Yay!

Both orphanages had gifts for the kids which was really sweet. William received a small jade Buddha pendant and Ella & Ethan received a silver pendant that they said was for good luck. Ella immediately put hers on - my girl loves her jewelry that's for sure. And anything sparkly. We're going to have to do some major shopping when we get home.

After everyone got their paperwork all finalized, we had a formal little ceremony followed by a series of photos. There was lot of pictures and video being taken. Yay - it feels good to officially be a family of 6 - the Hexa-Himsels. But it did seemed like it took forever to finish and get back on the bus to the hotel.

Vickie offered to take everyone to a restaurant to eat. Since very few people speak or understand English here, it's helpful to have Vickie to assist. I decided to stay back with the boys though since they were ready for a nap (and so was I).

After everyone returned from lunch, I took Ella and Andrew over to the Walmart to buy her some socks, snacks and a new Barbie. Today, the Walmart was crazy busy - and trying to keep up with Ella and Andrew made it an exhausting trip. But after that we enjoyed a quiet evening playing with the boys, including Ella. Google translate has been our lifesaver with her - but only when we have Internet connection in the hotel obviously. She is a very sweet girl who is so appreciative of everything she gets. She tells us she is anxious to learn English, and has started with some very simple words. It may be tough for a little bit but we are headed in the right direction. 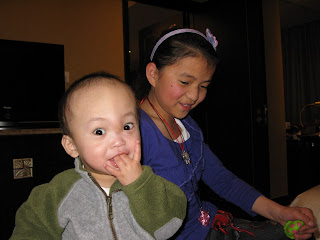 William definitely prefers his dad, but he is warming up to me. At least when I'm the provider of the food - and this boy can eat! And of course our little Ethan is one happy little guy - has a big smile all the time, and loves playing with toys, especially the ones William is playing with. I fear we'll hear a lot of "Mom, Ethan took my toy" in our near future. 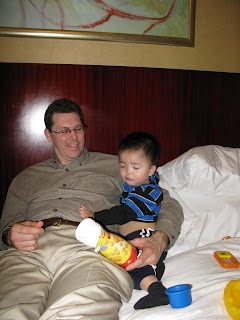 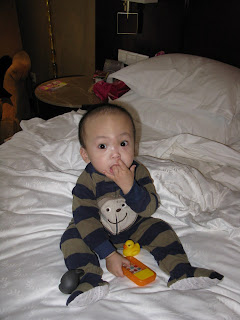 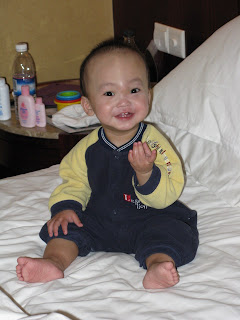 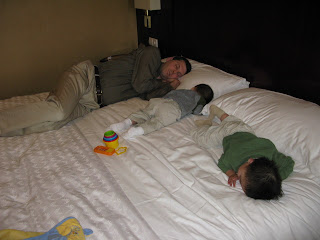 Another night down - I'll try to post pictures in the near future - just wanted to be sure to get an update posted.
Posted by Deb Himsel at 11:30 PM