Day two in Beijing was something Andrew was waiting for - The Great Wall. We met our agency's Beijing coordinator, Shirley, and the other family traveling with us in the lobby for a early morning start. We headed to the jade factory first, on our way to the Great Wall. The jade factory started with a tour and informational presentation on the different kinds of jade, the significance of jade in Chinese culture, as well as seeing some of the jade carvers hard at work. Then we spent some time in their showroom, looking at all the beautiful pieces of jewelry and figurines. And they had some rather large stairs that intrigued Andrew. He was pretty sure we needed one of those carved boats that was nearly 5 foot tall. After helping the Chinese economy with our purchase, we were off to the Great Wall. 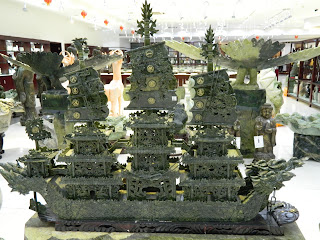 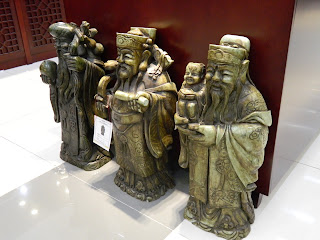 Andrew had already decided he was going to go further and higher than any of us. Aunt Nay and I were a-ok with that. We were both still recovering from those stairs at the drum tower. Lynné's pretty sure she pulled a muscle somewhere along the way, and was hurting. So we had 2 hours to explore, and Chris and Andrew took off on the steeper, more difficult path, while Aunt Nay and I headed to what we were told was the easier route. About half way into our climb, Lynné and I were convince there was nothing easy about our route. There were steep, uneven stairs with no handrails that frightened me to attempt, but there was no way we were missing out on this chance. So we kept plugging along, and the views were spectacular. The walk back was just as challenging, but well worth it. We met back up with Chris and Andrew and found out that indeed Andrew had gone the furthest and highest, and could have kept on going if we had more time. He was not tired or frightened and a bit disappointed that we had to leave for lunch. 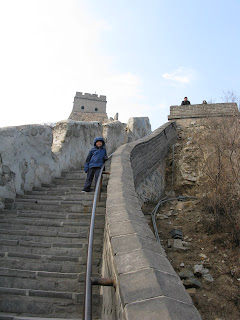 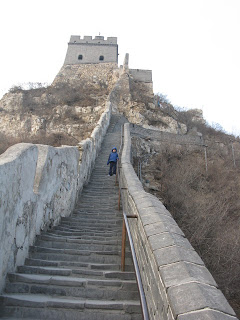 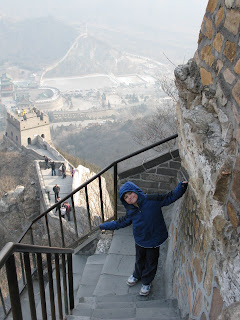 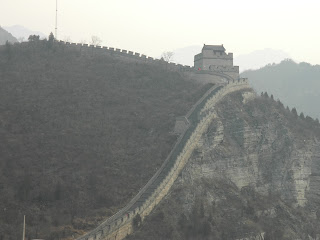 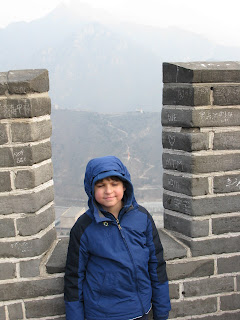 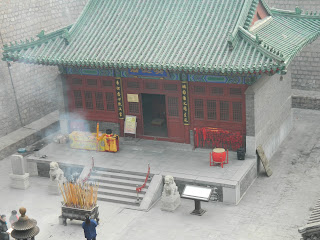 Lunch was another tasty experience. We ate with the other family and got to know them a bit better, while enjoying some wonderful Chinese dishes. Andrew has done well using chopsticks, and he's been willing to try just about everything. When we finished, the restaurant had a huge store attached, which we equated with a Cracker Barrel experience. Luckily we got out of that without any purchase, and headed off to our next stop. Shirley took us to the Olympic Plaza, where we got great pictures of the Bird Nest and the Water Cube. Very, very impressive. We got great pictures, and the added bonus of seeing the plaza decorated for Chinese New Year. And Andrew got bombarded again by people wanting to take his picture. He was a good sport, but I don't think he'll put up too much more with all the attention. It was quite cold as we walked the length of the plaza, so we were very glad to head to another tea ceremony to warm up. 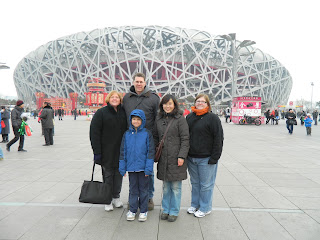 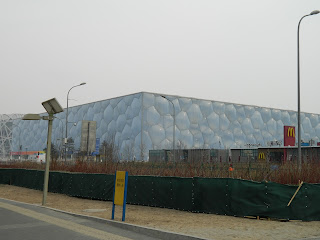 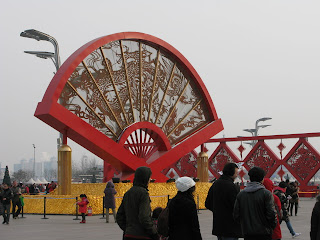 Yep, another tea ceremony - different tea house though. It was very similar to yesterday's but because there were so many of us, we were in a big room which didn't feel quite as quaint. Chris knows we are in trouble, because I found a few beautiful tea sets I want. He reminded me of the domestic weight limits on our next flight, so we didn't get a set yet. But just wait until we get Guiyang or Guangzhou - I'm getting us a tea set.

Next on the agenda was the acrobatic show. We were quite early, so we had to wait around for nearly an hour before it started. Alot of standing and waiting after our full day was not good for all of us who were exhausted. By the time we got into the show, we all needed a nap. Sitting down for a show with the lights out does not go well with tired people - not a good plan. I think Andrew stayed awake the longest. The rest of us dozed off and on. Well, Chris dozed more on than off. And the acrobatic show was quite odd, ending with some sad "David Copperfield wannabe" disappearing motorcycle act. Very odd indeed. Andrew fell asleep right before the big finale and we couldn't get him awake. Thank goodness for Chris' long arms - he was able to carry him out.

So we were back at the hotel shortly after 7, and Andrew was sound asleep snuggled into bed within minutes. Which left us very few options for dinner. Yep - Pizza again - take out this time. The good news - another day down, and closer to meeting the kids. Tomorrow, we tour the Forbidden City & Tiananmen Square before we head to the airport for our flight to Guiyang.
Posted by Deb Himsel at 4:15 PM